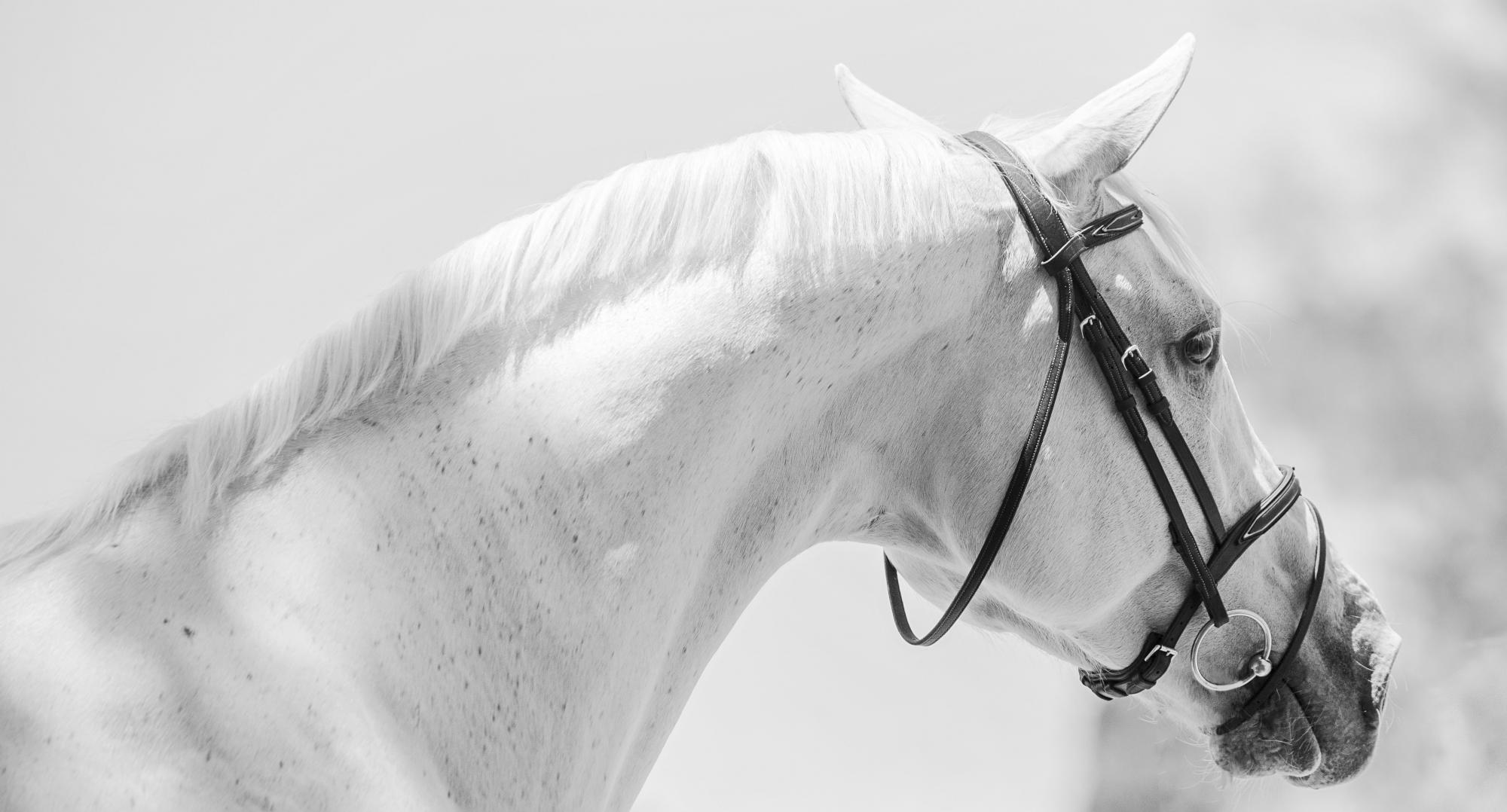 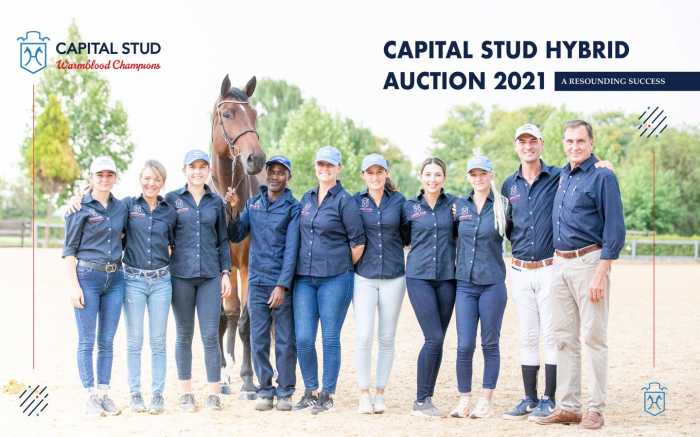 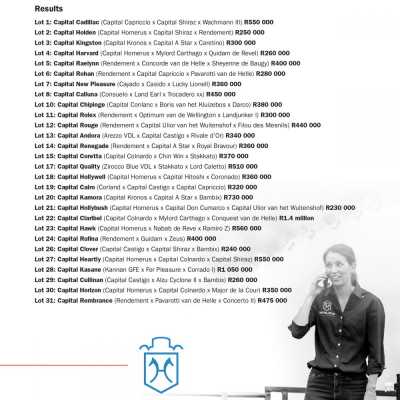 The Capital Stud 2021 Hybrid Auction was certainly a high point in the equestrian calendar and a top way to finish the year for all in attendance. The 2021 auction marked a return to live auctions, and for those of us able to attend in person, the experience was charged withemotion, camaraderie and, of course, great anticipation. This auction also brought the first-ever hybrid experience to South Africa, enabling anyone to either be there in person or watch the live stream. For those tuning into the live stream, the hybrid platform for bidders, the work of the camera-men and of course, Aidan Lithgow, the auctioneer, made the experience as good as it was for those in the room.

The quality of the horses on offer was exceptional. We saw scope, technique and rideability from these expertly produced youngsters, and the overall quality was world-class. Congratulations must go to the Capital Stud team on achieving this feat of brilliance and showing the collection off so marvellously to the captivated audience.

The atmosphere was real, with the auction hall moving from goosebumps to tears and back again in a matter of minutes. It was thrilling to be there and be part of the action. The collection of horses carried an energy of their own, and their presence in the arena was certainly felt. The results speak for themselves, but it is safe to say that Capital Stud is producing a very special type of sport horse for the future of the equestrian sport in South Africa.

The Friday night session with the under-saddle presentation of the auction horses was better attended than ever before. A first introduction to the arena and an audience for these young horses was testing, and it was a proud moment for the team to see the youngsters perform better and better. The celebrations went on late into the night with nervous energy anticipating the sale the next day.

Saturday morning commenced with a presentation of some young and current Capital stallions to the audience. It was special to see a selection of young stallions from the upper echelons of Europe’s current offering, who Henning has purchased over the last few years. Henning’s investment in these horses and, by the same token, in South African equestrian sport is really something to be admired. The world’s best bloodlines were on display for
all to see, and the future certainly looks bright for Capital Stud breeding and South African sport.

In the words of Dirk Zagers: "What Henning Pretorius has created in South Africa in terms of sport and breeding is unbelievable. His input lifted the warmblood breeding to the next level. For a long time, the South African sport depended on European imports but with the quality of horses that Capital Stud breeds we are going to see more home-bred horses at the top of the sport."

After this impressive display, Henning Pretorius gave an opening speech to welcome the assembled crowd. In his own words:

“With all of the changes over the past 12 months both globally and here at the Stud, I can honestly say that my love for sport horses and my vision to see South African horses and teams competing at international levels has never been surer. Aside from my love and focus on bloodlines and genetics, I am more committed than ever to the development of our young horses and the Capital Stud team. We continue to seek better ways to give our young horses the best introduction and exposure in their formative years, with all of our horses now spending an extra year under saddle. We feel this and the idyllic conditions at Summerhill will ensure our horses have the time and space to grow and develop into the world-class athletes they are bred to be.”

There is no doubt that the work Henning and his dedicated
team have put into creating this collection has produced some exceptional athletes, and a glance at the young stallions on display and the damlines he has imported, shows how committed he is to the future of the sport.

Henning then went on to look at the successes of the Stud in the past 12 months. In his words:

The selection of horses on offer on this auction should make the Capital Stud Team incredibly proud. Henning’s vision, the talented team of riders and, of course, the horses themselves are all responsible for the success of this auction. From top international level competitors to the best amateur horses available, there really was a horse for everyone on this auction.

To reflect on this collection and its origins, one also has to look at the stallions who have produced them. Homerus, Kronos and of course, Colnardo had a large influence on this collection, and these stallions are deservedly a great source of pride for all at Capital. And, yet, the biggest influence, with seven spectacular progeny on the auction, was undoubtedly Rendement. Henning fittingly finished his speech with a very emotional tribute to Rendement:

“As most of you will almost certainly know, we lost Rendement suddenly just a few months ago. This horse was a true gentleman,
with endless talent and, in the words of Johan Lotter, the heart of a
lion. Rendement competed internationally with Johan, achieving great acclaim overseas; all of which culminated in a wonderful performance at the World Equestrian Games in Kentucky in 2010. We couldn’t be more proud to have provided this stallion with the retirement he so well deserved at Summerhill Equestrian for the last few years, and just wish that he could have had a few more years to further bask in the glory of his achievements. We feel his passing keenly. Our only consolation is the talent and temperament he so clearly passes onto his offspring. For anyone taking home a Rendement youngster tonight, please know that you are sitting on a truly great horse, carrying the genes of the most decorated stallion, who until very recently, stood on South African soil. He was a special horse and his offspring are no different.”

With this demonstration of Henning’s dedication and love for his sporthorses, the auction commenced with Capital Cadillac, Lot 1, entering the room. As soon as he entered the arena, the energy grew to a new level. For the next few hours, the bids flew with a mixture of bids from the floor, and the ‘ping’ of the online bidders. Cheers of excitement and pure exhilaration filled the room, culminating in emotional meetings between horse and rider as the hammer came down. If the love felt in the room was anything to go by, these horses are going to some very special homes. We are certain that it will not be long before these horses are clearing up in the showjumping arena.

The results of the fifth Capital Stud Auction really speak for themselves. The quality for these talented youngsters was visible. Those bidding
were determined to win their chosen lots. Two lots deserve special mention for the price-tags they achieved. Firstly we have Capital Claribel, the “beautiful, big, blood-type horse”, who prompted fierce bidding wars, and eventually sold for R1.4million. Described by the team as “looking even more promising than her father, Capital Colnardo, did at this age”, it is no surprise that people fought hard to take her home. Then Capital Kasane, the talented Kannan colt, who topped the million mark at R1.05million and generated great excitement in the room. In the words of Dirk Zagers “This horse has endless potential and quality. He has a great canter and enormous power.” We can certainly advocate for the fact that he really can jump!

HQ wishes all of the new owners the best of luck and every success with their new horses. Finally, we need to congratulate the Capital Stud Team for all of their hard work and their investment in breeding and producing this exquisite collection. We can’t wait to see where 2022 takes you and your horses!