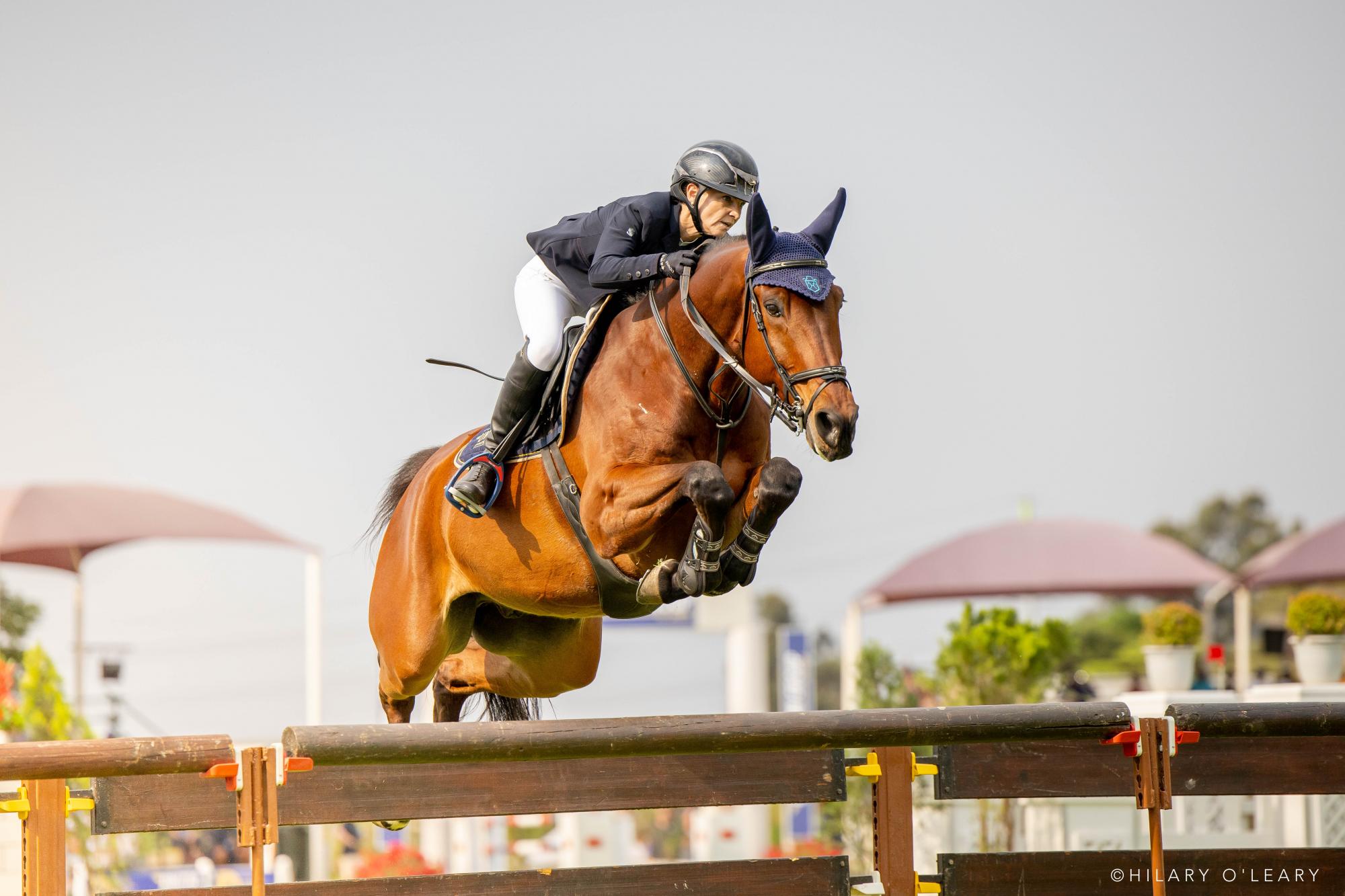 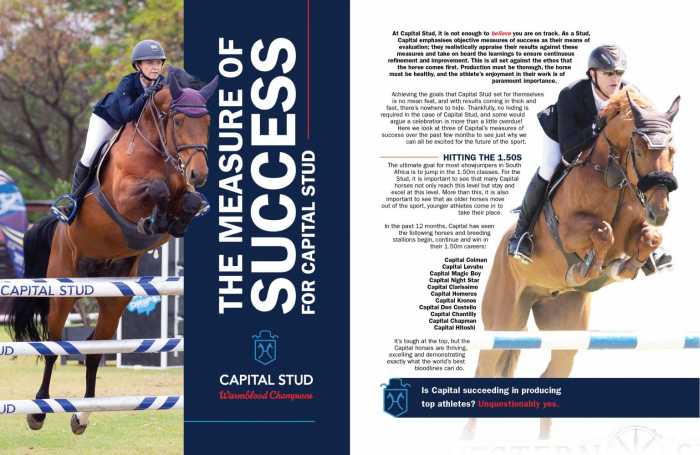 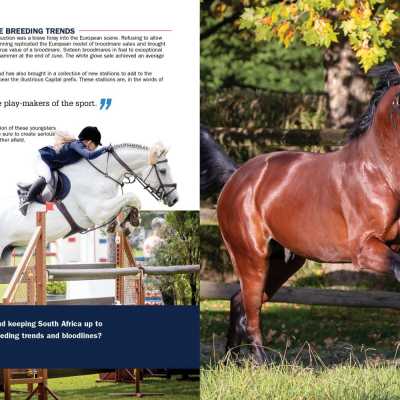 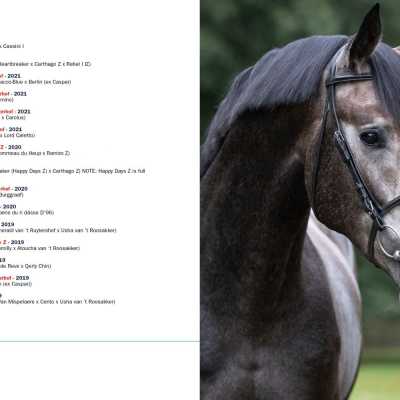 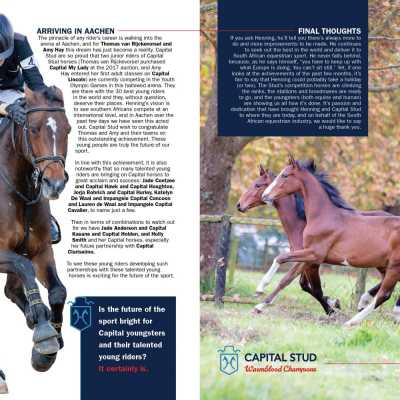 THE MEASURE OF SUCCESS

At Capital Stud, it is not enough to believe you are on track. As a Stud, Capital emphasises objective measures of success as their means of evaluation; they realistically appraise their results against these measures and take on board the learnings to ensure continuous refinement and improvement. This is all set against the ethos that the horse comes first. Production must be thorough, the horse must be healthy, and the athlete’s enjoyment in their work is of paramount importance.

Achieving the goals that Capital Stud set for themselves is no mean feat, and with results coming in thick and fast, there’s nowhere to hide. Thankfully, no hiding is required in the case of Capital Stud, and some would argue a celebration is more than a little overdue!

Here we look at three of Capital’s measures of success over the past few months to see just why we can all be excited for the future of the sport.

The ultimate goal for most showjumpers in South Africa is to jump in the 1.50m classes. For the Stud, it is important to see that many Capital horses not only reach this level but stay and excel at this level. More than this, it is also important to see that as older horses move out of the sport, younger athletes come in to take their place. In the past 12 months, Capital has seen the following horses and breeding stallions begin, continue and win in their 1.50m careers:

It’s tough at the top, but the Capital horses are thriving, excelling and demonstrating exactly what the world’s best bloodlines can do.

KEEPING UP WITH THE BREEDING TRENDS

Capital Stud’s latest broodmare auction was a brave foray into the European scene. Refusing to allow South Africa to be left behind, Henning replicated the European model of broodmare sales and brought South Africa up to speed on the true value of a broodmare. Sixteen broodmares in foal to exceptional Capital stallions went under the hammer at the end of June. The white glove sale achieved an average price of R120,000.

As if this was not enough, the Stud has also brought in a collection of new stallions to add to the entourage of greats that already bear the illustrious Capital prefix. These stallions are, in the words of Dirk Zagers, "Set to be the future play-makers of the sport."

The foresight shown in the selection of these youngsters is inspiring, and these horses are sure to create serious waves across the country and further afield.

Is Capital Stud keeping South Africa up to date with breeding trends and bloodlines? Absolutely.

The pinnacle of any rider’s career is walking into the arena at Aachen, and for Thomas van Rijckevorsel and Amy Hay this dream has just become a reality. Capital Stud are so proud that two junior riders of Capital Stud horses (Thomas van Rijckevorsel purchase Capital My Lady at the 2017 auction, and Amy Hay entered her first adult classes on Capital Lincoln) are currently competing in the Youth Olympic Games in this hallowed arena. They are there with the 30 best young riders in the world and they, without question, deserve their places. Henning’s vision is to see southern Africans compete at an international level, and in Aachen over the past few days we have seen this acted out. Capital Stud wish to congratulate Thomas and Amy and their teams on this outstanding achievement. These young people are truly the future of our sport.

Then in terms of combinations to watch out for we have Jade Anderson and Capital Kasane and Capital Holden, and Holly Smith and her Capital horses, especially her future partnership with Capital Clarissimo.

To see these young riders developing such partnerships with these talented young horses is exciting for the future of the sport.

Is the future of the sport bright for Capital youngsters and their talented young riders? It certainly is.

If you ask Henning, he’ll tell you there’s always more to do and more improvements to be made. He continues to seek out the best in the world and deliver it to South African equestrian sport. He never falls behind, because, as he says himself, “you have to keep up with what Europe is doing. You can’t sit still.” Yet, if one looks at the achievements of the past few months, it’s fair to say that Henning could probably take a holiday (or two). The Stud’s competition horses are climbing the ranks, the stallions and broodmares are ready to go, and the youngsters (both equine and human) are showing us all how it’s done. It’s passion and dedication that have brought Henning and Capital Stud to where they are today, and on behalf of the South African equestrian industry, we would like to say a huge thank you.

Thank you HQ for the article