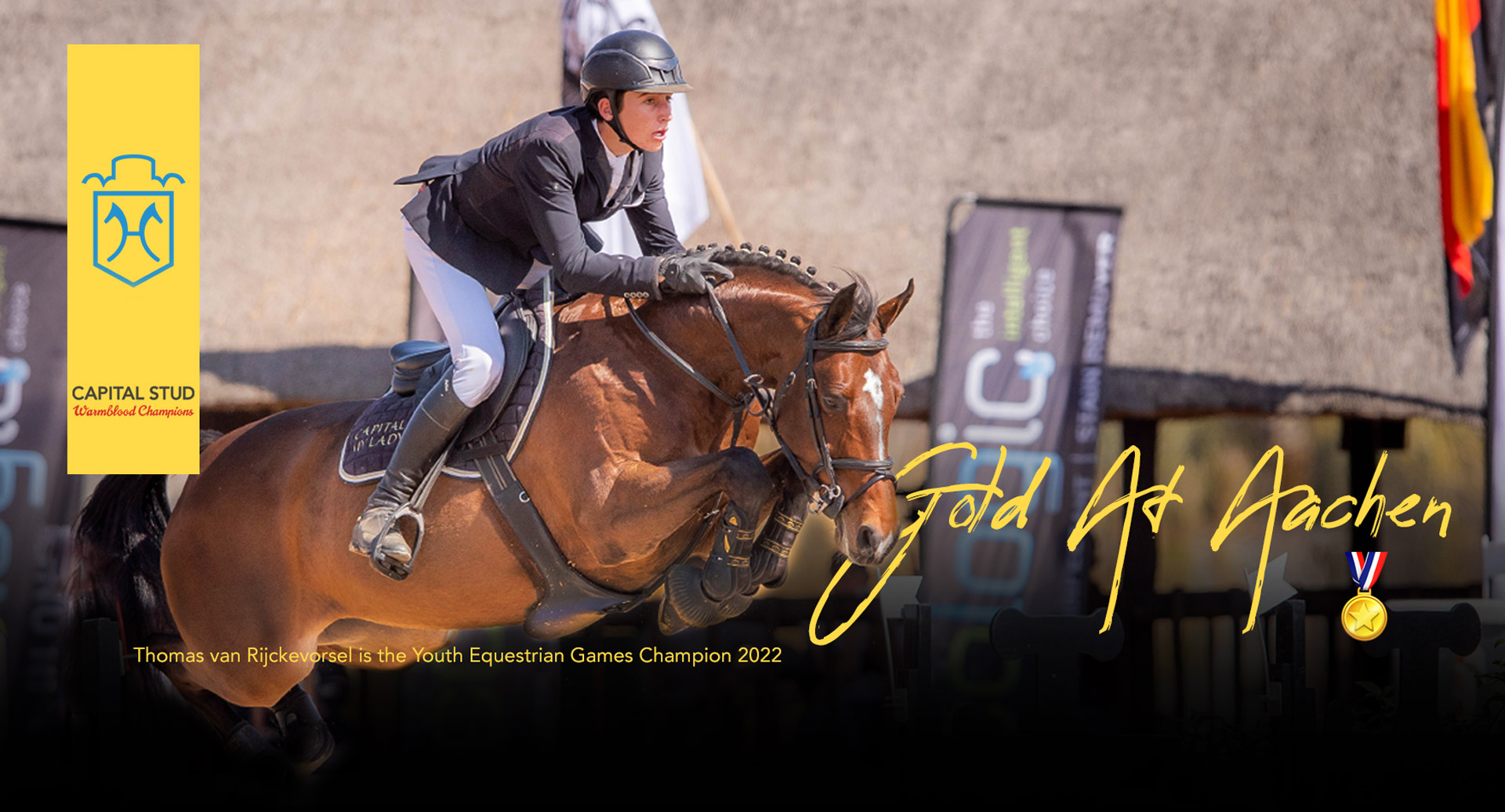 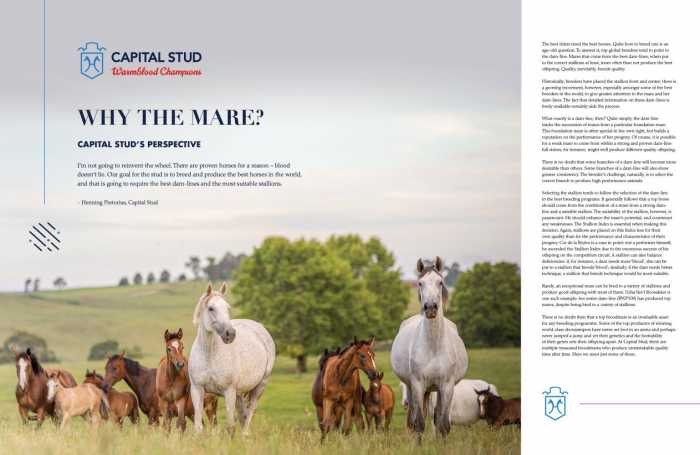 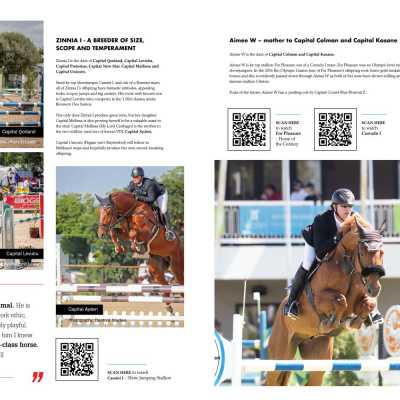 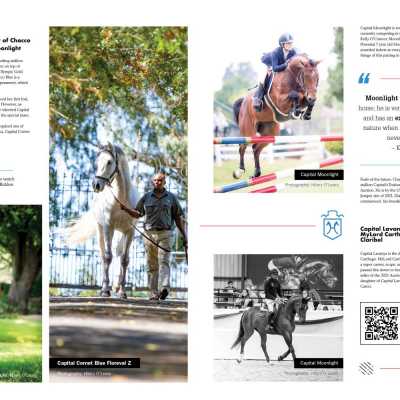 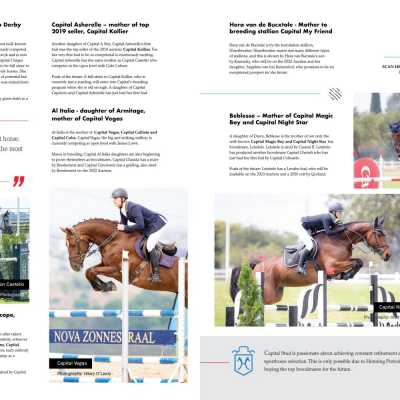 I’m not going to reinvent the wheel. There are proven horses for a reason – blood doesn’t lie. Our goal for the stud is to breed and produce the best horses in the world, and that is going to require the best dam-lines and the most suitable stallions.

The best riders need the best horses. Quite how to breed one is an age-old question. To answer it, top global breeders tend to point to the dam-line. Mares that come from the best dam-lines, when put to the correct stallions at least, more often than not produce the best offspring. Quality, inevitably, breeds quality.

Historically, breeders have placed the stallion front and centre; there is a growing movement, however, especially amongst some of the best breeders in the world, to give greater attention to the mare and her dam-lines. The fact that detailed information on these dam-lines is freely available certainly aids the process.

What exactly is a dam-line, then? Quite simply, the dam-line
tracks the succession of mares from a particular foundation mare.
This foundation mare is often special in her own right, but builds a reputation on the performance of her progeny. Of course, it is possible for a weak mare to come from within a strong and proven dam-line: full sisters, for instance, might well produce different quality offspring.

Selecting the stallion tends to follow the selection of the dam-line in the best breeding programs. It generally follows that a top horse should come from the combination of a mare from a strong dam- line and a suitable stallion. The suitability of the stallion, however, is paramount. He should enhance the mare’s potential, and counteract any weaknesses. The Stallion Index is essential when making this decision. Again, stallions are placed on this Index less for their

own quality than for the performance and characteristics of their progeny. Cor de la Bryère is a case in point: not a performer himself, he ascended the Stallion Index due to the enormous success of his offspring on the competition circuit. A stallion can also balance deficiencies: if, for instance, a dam needs more ‘blood’, she can be put to a stallion that breeds ‘blood’; similarly, if the dam needs better technique, a stallion that breeds technique would be most suitable.

There is no doubt then that a top broodmare is an invaluable asset
for any breeding programme. Some of the top producers of winning world-class showjumpers have never set foot in an arena and perhaps never jumped a jump and yet their genetics and the heritability
of their genes sets their offspring apart. At Capital Stud, there are multiple treasured broodmares who produce unmistakable quality time after time. Here we meet just some of them.

ZINNIA I - A BREEDER OF SIZE, SCOPE AND TEMPERAMENT

Sired by top showjumper Cassini I, and out of a Romino mare, all of Zinnia I’s offspring have fantastic attitudes, appealing looks, scopey jumps and big canters. Her most well-known son is Capital Levubu who competes in the 1.50m classes under Bronwyn Dos Santos.

Not only does Zinnia I produce great sons, but her daughter Capital Mellissa is also proving herself to be a valuable asset to the stud. Capital Mellissa (My Lord Carthago) is the mother to the two-million-rand son of Arezzo VDL Capital Ayden.

Ayden is a magnificent animal. He is super talented, has a great work ethic,
a gentle mind, and is extremely playful. From the very first time I sat on him I knew

he had everything to be a world-class horse. – Neriske Prinsloo Hill

Owned by Capital Stud Chacha Floreval produced her first foal, Capital Moonlight, after which she was sold. However, as soon as Henning Pretorius saw her value in the talented Capital Moonlight, he made it his mission to reacquire the special mare.

He not only achieved this, but in the process acquired one of the most exciting young stallions in South Africa, Capital Cornet Blue Floreval Z!

Capital Moonlight is now owned by Team Rotoflo and is currently competing in the 1.40m classes in Belgium with rider Kelly O’Connor. Moonlight won Gauteng Champs and the Potential 7 year old Showjumper Series. He was consistently awarded tickets at every show he attended. We will see big things of this pairing in the future.

Moonlight is an incredibly athletic horse; he is very elastic through his body and has an extremely competitivenature when going into the arena. He never lets you down
– Kelly O’Connor

Foals of the future: Chacha Floveral is also mother to young stallion Capital’s Toulouse who was shown in hand at the 2021 Auction. He is by the USEF leading Hunter sire and leading Jumper sire of 2021, Diarado. Capital’s Toulouse has already commenced his breeding duties.

Capital Unique is sired by Capital Ulior. Her most well-known offspring is Capital Don Castello, who previously competed in the South African Derby with Ian Van Schalkwyk and is now performing wonderfully under Jorja Rohrich. Capital Unique has a daughter Capital Donique who happens to be full sister to Capital Don Castello and she also produces lovely horses. She was ridden briefly and showed a huge amount of potential but after an unfortunate injury in the paddock, she was retired from sport and went on to breed.

Foal of the future: Capital Donique has recently given birth to a filly by Capital Qorland.

Don Castello is the perfect horse; he gives me confidence and the most amazing feeling
– Jorja Rorich

Sired by Capital A star, Anja has produced talent after talent.
All of her offspring have scope, bravery and sensitivity, whoever their sire. Capital Commodore, Capital Destiny, Capital Calida and Capital Kamora, all by different sires, each embody Anja’s class. This is a true testament to Anja’s stamp as a broodmare.

Foals of the future: Capital Anja has a yearling, sired by Capital Impossible.

Another daughter of Capital A Star, Capital Asherelle’s first foal was the top seller of the 2019 auction, Capital Kollier. For her very first foal to be so exceptional is enormously exciting. Capital Asherelle has the same mother as Capital Castello who competes in the open level with Gabi Lubner.

Foals of the future: A full sister to Capital Kollier, who is currently just a yearling, will enter into Capital’s breeding program when she is old enough. A daughter of Capital Capriccio and Capital Asherelle has just had her first foal.

Al Italia is the mother of Capital Vegas, Capital Callisto and Capital Cuba. Capital Vegas, the big and striking stallion, is currently competing at open level with James Lowe.

Mares in breeding: Capital Al Italia daughters are also beginning to prove themselves as broodmares. Capital Chasida has a mare by Rendement and Capital Cyncinatie has a gelding, also sired by Rendement on the 2022 Auction.

Hera van de Bucxtale is by the foundation stallion, Heartbreaker. Heartbreaker mares suit many different types
of stallions, and this is shown by Hera van Bucxtale’s son
by Kentucky, who will be on the 2022 Auction and her daughter, Sapphire van her Keizershof, who promises to be an exceptional prospect for the future.

A daughter of Darco, Beblesse is the mother of not only the well-known Capital Magic Boy and Capital Night Star but broodmare, Letsitele. Letsitele is sired by Cassini II. Letsitele has produced another broodmare Capital Cherish who has just had her first foal by Capital Colnardo.

Foals of the future: Letsitele has a Levubu foal, who will be available on the 2023 Auction and a 2020 colt by Qorland.

Capital Stud is passionate about achieving constant refinement and improvement in their sporthorse selection. This is only possible due to Henning Pretorius’ dedication to finding and buying the top broodmares for the future.

Thank you HQ Magazine for this article link here .>>>>