Cumano, the sire of Armani, is one of the most outstanding jumping stallions on the international circuit. He has performed time after time at the very highest level and memorably won the World Championship in Aachen under Jos Lansik. As a breeding stallion, Cumano has produced more than a few approved stallions and top-quality sport horses.

Capital Armani stands as one of the founding stallions of Capital Stud. Armani competed right up to the 1.40m classes. 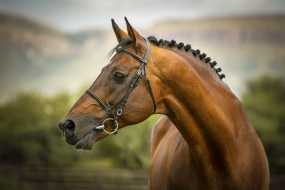