Chicoletto Z is son of Cassini II, who is full brother to the successful international showjumper and breeding stallion, Cassini I, who has sired licensed progeny such as Cumano (under Jos Lansink), Casandra (under Marcus Ehning) and Cassino (under ANdreas Otto).

From his dam's side comes the stallion Coronado, who is rapidly gaining popularity as a sire of dams, with his dam being by Rebel Z, who is a full brother to Ratina Z - 'Mare of the Century'. Coronado is one of the best producers of dams in Europe with top Grand Prix winners, such as our own Capital Colnardo, who is now jumping abroad with Jennifer Gates. Other great combinations out of a dam by Coronado are Ludger Beermaum's Chiarra and Claire Z with Pieter De Vos from Belgium.

Having competed up to the 1.40m classes, Chicoletto Z shows incredible scope with his careful jump. 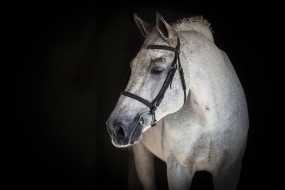